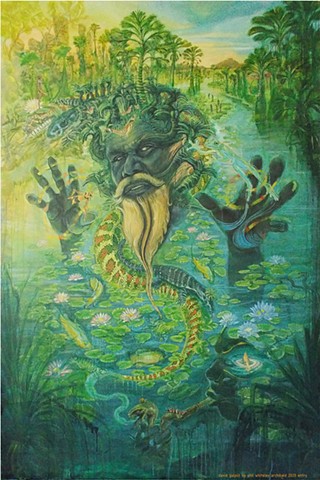 i only met david once in murray bridge, to sketch him for this portrait, considering his health he had done me such a big favour to let me intrude....he was actually quite quiet, though his dialect made it hard for me to grasp his full meaning..... cheekily never told me his totem was a kingfisher though i did ask...i heard of one of his dreamtime stories the hornet and the frog so that was what i drew, the creatures in the bg are his painting totems snake,goannas, bream,turtle,lilies all food i would think of which he was in reality an extremely skilled hunter and tracker.

though i also did bg movie mattes in the "australia" movie in which he appeared as st george.... he appears again as such in the picture

i think he was(RIP DAVID) australias most powerful shamen, using his hands of power and understated cheeky talk to weave his magic on the audience.

he was born in the bush in the centre of arnhem land, but was one of the "stolen generation" removed as a young boy to a white mission it was there he was given the name david and saw his rise to fame.

i wish to thank his partner mary hood for all her help in setting up the meeting and on the day..i am sorry for your loss.

what follows is about the way coincidence gives an extra push as what might be big events in your life, and is really of only interest to working artists

strangely the exact night before leaving for murray bridge to see david, my unit water heater tank split and flooded the whole apartment during the night as i slept, i awoke in the dark of night to only what can be described as a biblical flood, it destroyed 6 months work, my best art books, furniture. took a week to dry the unit, and another 3 weeks of lets just say bare debris strewn concrete, so those who have been flooded out recently thoughts with you.

i have been to arnhem land and camped along roper river road, so know first hand the joys of davids homeland, the smell of the landscape, the heat, somehow the rocks and sky seem to play a part not noticed in the urban playset man has built. david gulpilil david Dalaithngu by phil whiteley archibald 2020 entry david gulpilil by phil whiteley moranprize 2021 entry #ArchibaldPrize #ArchibaldPrize2020 #artgalleryofnsw #david gulpilil #david Dalaithngu #MoranPrize #MoranPrize2021